The Amungme population  consists of  a population of about 13000 people in the Indonesian province of  Papua.  Under the Dutch they used to live in 17 valleys on the southern flanks of the Central Mountain Plateau of Former Dutch New Guinea. They were hunter gatherers who also had rotating gardens and they were totally self-sufficient.
These days many Amungme live elsewhere as they have been chased of their land but they are still very attached to the land of their forefathers and they consider the surrounding mountains to be sacred.

This still leads to friction with the Indonesian government which mines the mineral resources in the area. The biggest problem is the Freeport Mines situated in the heartland of the Amungme. The extraction of enormous amounts of copper, gold and other metals destroyed the landscape and have lead to quite a number of protests which are brutally repressed  by the Indonesian military. 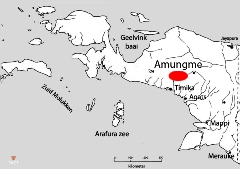 The Amungme believe that they are the descendants form the eldest son of the human race. Their ancestors lived in the North and south of the Central Mountain Range and it was covered by eternal snow. 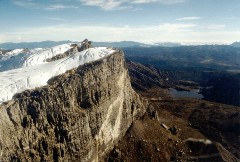 This area was called Amungsa. Oral tradition has it that the Amungme come from the Amungme Pagema Wamena area in the Baliem Valley. In the mountains they hunted and grew sweet potatoes and vegetables on fenced garden plots. Amungme  actually consists of two words ‘amung’ and ‘mee’ which mean ‘under’ and ‘human’.
Typical characteristics of mountain people are mostly a result of nature. The Amungme are tough, non-compromising, fair and they try to avoid danger if they can. They are determined and regard themselves as the natural heir of God. When they die, the Amungme believe that their spirit goes to the mountains to dwell with their ancestors and other supernatural beings. For this reason the tops of these mountains are sacred. Eventhough most of the Amungme  have converted to the Catholic faith, they still believe in the role that their ancestors play in  daily life. To this day, the amungme have a number of words that are only used when they are on holy ground. To them it is an affront that their mountains together with the spirits of their ancestors are being excavated.

The ancestral land of the Amungme covers an area of 2,6 million hectares and extends from the Nduga Tribe in the east right up to Lake Panai in the west. In the north it borders onto the Dani and Damal Tribal lands and in the south and along the coast to that of the Kamoro , who live east of Etna Bay. The Amungme live in the mountain valleys of Tsinga, Hoyea, Ilaga and Noemga as well as in a number of smaller valleys called Bella, Alama, Aroacp and Waa.  However, the Moni tribe, who also live 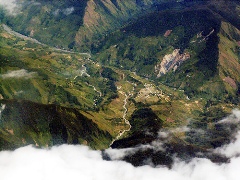 in this area, argue that the Aroaop and Waa valley belong to them. The Amungme and the Damal to the north  of the Central Plateau are culturally very similar and they belong to the same language group.
First contact with non-Papuans occurred in 1912 during the very first European Expedition which was on its way to the Carstensz top under the leadership of  Alexander Wollaston, a  British doctor and explorer.  Subsequent contact was in 1936 with the Cartensz Expedition whichAnton Colijn, Jean Jaques Dozy and Frits Wissel.  On this  trip, the geologist Dozy discovered the 3600 meter high mountain which possibly contains the largest copper ore deposits ever found.
In the early 1950’s the first Roman Catholic missionaries arrived in the Amungme area.  In 1952,Ken Troutman, an American Missionary reaches the Ilaga Valley after a journey across the mountains from Enarotoli at the Wissel Lakes.

Then in 1954, the Amungme are called to shift to Akimuga, an area along the coast, by the Franciscan Michael Cammerer and Mozes Kilangin who had become their leader. The reason for this was the  growth of the catholic faith and the difficulty of servicing the community across all those valleys in the mountainous region that the Amungme were living. Between 1960 and 1964 more than 3000 Amungme from the Tsinga- and Noemga Valley left for the lowlands of the Akimuga area to start working on rubber and coffee plantation. The subsequent neglect of this region and the lack of resources under the Indonesians after 1963 caused the spread of Malaria and this led to a high mortality rate among the Amungme migrants. 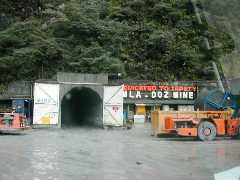 On 7 April 1967 the Indonesian Government  gave Freeport Mines the right to excavate the mineral wealth  situated in the heartland of the Amungme, without their permission or consultation of any kind.  Actually, the American Mining Company Freeport-McMoran got a thirty year lease to operate in this area. It has been estimated that there is 23 million U.S. dollars worth of copper and about 15 billion worth of gold to be excavated in these mountains. Within a very short time span a major mining project was set up in  Waa Valley. The most drastic change to the Amungme’s  way of life  occurred in 1970.  At that time, Freeport began with the construction of a 120 km long highway between Amamapare on the coast and the Cartennsz highland plateau, which was the Amungme’s hunting ground, in order to get ease of access to the mountain of ore. Across the way, a new city arose: Tembagapura, which literally means ‘copper city’. In 1992 this town consisted of some 8000 inhabitants, 7.400 of which were Freeport employers. In this area there were gardens and several ancestral lands belonging to the Natkime tribe. It contained three sacred locations which were called Mulkine, Awinkawak and Tundimagon. Complications arose as some Papuans, who were unhappy with the Indonesian occupation, joined the OPM (Organisasi Papua Merdeka - a Free Papua Organization). A number of Amungme also joined this organisation. In 1977 a Freeport pipeline is blown up and a number of installations are sabotaged. A massive retaliation of the Indonesian military set off an ongoing cycle of violence. Amungme chief,  Kelly Kwalik,  became the  leader of actions  in protest against Freeport.
The Amungme living in Arwandop Valley and Tsinga Valley became victims of the mining developments. Traditionally, the valley residents were wealthy tobacco producers but the landscape was ruined by mining operation. (Tobacco played a key role in social life and relationships.) By 1988 the ore mount was almost entirely excavated. Freeport then moved 3km up the road to Grasberg. This place is now the largest open mine in the world with an estimated production of 57.000 tons of iron ore per day.  The low-land  area was also  affected. In the early 90’s the Freeport city of Kuala Kencana arose in record time.

The Aijkwa River, which runs through the Amungme territory, is seriously polluted.  Purifying a gram of gold requires 100 litre of water. Freeport dumps around 230.000 tons of tailings into the water and the company has requested permission from the Indonesian government to dump up to 300.000 tons a day. This waste contains heavy metals and is highly toxic to fresh water organisms and marine life. Crops 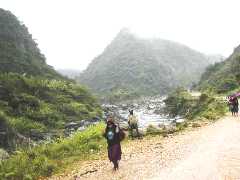 cannot be cultivated anymore due to  flooding and the Indonesian authorities has ordered people not to drink the water. Toxic residues and sulphides continue to infiltrate the ecosystem which has become an ecological time bomb. If the pH levels continue to rise, all life in the river will perish.
In 1991 Freeport signed a further contract with Indonesia which gave the company another 2,5 million hectares (which is as big as the Benelux) on top of the already existing leases secured already. This area extends to the border with Papua New Guinea. Freeport also conducted research into the ore reserves within Lorentz National Park nearby. This reserve was initially set up to prevent Freeport from destroying the virgin rainforests. However, the American  mining company has now managed to  get permission to excavate small sections and has actually started exploring the whole 2.150.000 hectare park.

The Indonesian Constitution states that land, water and natural resources are meant to promote people’s welfare. This principle was even incorporated in the very first agreement signed by Freeport in 1967. The contract also requires Freeport to let local inhabitants participate in the development. The Amungme and the Kamoro asked for compensation in the form of  schools, health clinics, markets and shops. Despite the fact that such an ’agreement’ was included as part of the deal, the ‘requests’ had to be repeated in 1988. Freeport is n 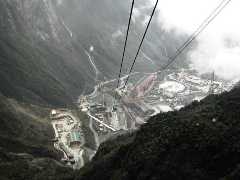 ow trying to do something about the negative image of the company.
Freeport maintains that the mining activities have a positive spin off effect on the rest of West Papua. However, the massive profits mainly benefit the Indonesian bureaucracy and  foreign investors. In 2006 Freeport paid, according to their own records,  $1,600.000,000 (US) in salaries and taxes to Indonesia. The Papua population hardly gets anything of the proceeds, but does make such profits possible because of the low wages that are being paid out to them. In 1996 the Amungme and the Kamoro started two lawsuits against Freeport in the US and they demanded millions of euros in damages, including damages because of human rights violations.  Under pressure  of the 1996 lawsuits, Freeport set up a fund which had 5 million dollars available for housing and health care for the local Amungme and Kamoro.  Freeport stated that it will improve Papua schools and provide seed-funding to create work and provide Papuans with income.
In August of 2009 Freeport had to defend itself  once again. This time against accusations that the mining is causing enormous damage to the natural environment. This charge was mainly to focus on the pollution of the Aijkwa River.

Since the beginning of 1968, thousands of impoverished Amungme and Kamoro have been forcibly removed from the mining area. The Amungme were also forbidden to enter Freeport strongholds like Tembagapura, Timika airport and other areas ‘belonging’ to the company. The military sealed off the area out of fear for attacks by the OPM. Freeport contributed a sum of one million dollars to these military operations. For a long time, Freeport was totally closed off to outsiders. Even today, visits to the mining area are ‘discouraged’. The airport at Timika, Mozes Kilangin Airport, is guarded by armed security personnel employed by Freeport. Meanwhile, an Australian company has made  changes to the airport to allow the biggest planes there are to fly into the region. 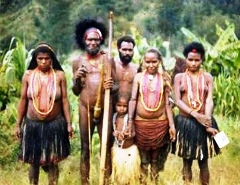 Not being able to take a fair share of the wealth that is being produced from their own territory, is a major complaint voiced by many Papuans. Only one percent of the proceeds comes to the indigenous population that actually own the land.
According to the American ethnographer Alice Gibbons, the arrival of Freeport resulted in uncontrolled greed among some of the locals, alcoholism, prostitution and venereal diseases, previously the treatable variety, but now it includes HIV/AIDS. Tribal leaders confirm that the community is falling apart because of the presence of Freeport. “Because of the mines, our traditional forms of work have disappeared. Many of our people are addicted to alcohol and Tobacco. Our standard of living is low and unemployment is high”.

- Refer to Theme page Similarities and differences among the Mountain Papuans
-  The Amungme Book, Kal Muller, Papuaweb.org,  October 2001.
-  Video  part 1 and part 2 about the Amungme having very little control over their land and their culture being under threat. TV producer Francis Assadi visited this Papua population at the end of 2008. Also refer to his photobook.
- Article on Freeport Mining in ‘Directions Magazine’ about the pollution caused by mining operation in the surrounding area and the evidence of the receding snow lines. Both are visible on high resolution satellite images.