Little is known about prehistoric times in former Dutch New Guinea. Because of the inhospitable

landscape and fast growing vegetation in the rainforests, only a  few traces of the past remain. The semi-nomadic lifestyle of the indigenous people does not leave much evidence to go on either. The first inhabitants of New Guinea  are thought to have migrated to this island via South-east Asia around 50.000 years ago. It is possible to form an impression  of the timeframe from the beginning of the megalithic period, 30.000 to 40.000 BC.

Because of the Many rock drawings found dating back to this period. These drawings or petro glyphs show a remarkable resemblance to those discovered in East Timor. The soil composition of the geological sites in East Timor and Papua are also very similar. Most of the rock drawings have been found on limestone walls or in caves along the coast. From the drawings and the iron artifacts discovered in caves on the island of Mysol, near the Bird’s Head area, it can be concluded that trade with other parts of Asia was already occurring in the era before Christ. According to Dr. M. Irfan Mahmud, Head of the Archeological Research Centre in Jayapura: ‘Rock Art  and the study of prehistoric sites are important, indispensible even, for gaining insight into the origin and culture of Papuans’. 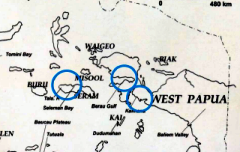 
According to the Archeological Research Center, about ninety locations with valuable rock drawings or petro glyphs have been identified in Indonesian Papua. For the indigenous population a rock with an age old drawing is sacred. The Papuans ascribe the drawings to  ancestral spirits  and evil ghosts, said to 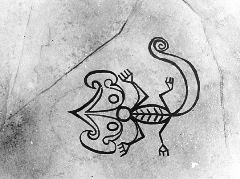 have made the drawings before human beings were created.
People in prehistoric times had various skills in agriculture, metallurgy, weaving, jewelry, but did not use written script. Their religious ideas were animistic: they thought not only humans but also plants and animals, objects and natural phenomena were imbued with magical powers. There were numerous rituals to appease the many ghosts and spirits that roamed this world, including the spirits of their ancestors.  Elements of these animistic ideas have continued over time and there are still many rituals to appease the ancestors among current Papuan peoples.
Hand silhouettes are depicted at many locations where rock drawings were found. At Bitssyaru Bay and Triton Bay in the Kaimena village region, images of Maturo (Half-man, half-lizard) were found as well as drawings of fauna, flora and geometric figures. Images of every day objects such as boats, boomerangs, spears, stone axes sago, penis sheaves and masks were found on flat stone surfaces, sometimes meters above sea level.  In 1939, the drawings on steep surfaces of rocks situated near the coastal island of Narnatote, in the Kaimena region, were described by the Dutch researcher W.J.Cator.  Artistic drawings have also been found at several places in the maze of lagoons on the east side of Mysol and these date to a period when the sea level was 30 meters lower than it is today. These images are on the side of rocks or in shallow overhanging caves. These creations are many thousands of years old.


In 2009 dozens of so called  Matuto drawings were discovered in the Kaimana region. “A matuto is 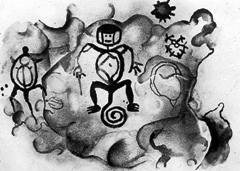 regarded as an ancestral hero”, said Dr. M. Ifran Mahmud  of the Archeological  Research Centre. “The Matuto motives on rock faces are of religious significance and are representations of people who lived in this region in prehistoric times”.  According to  the Dr. Ifran Mahud  ,“There are also images of a particular palm tree which seemed to have protective  power to ward off evil influences”.
Matuto paintings have been found at several locations: On Rock surfaces  in Omborecena, Memnemba, Memnemnambe and in the village of Maimai  near Tumberawasi. Other prehistoric drawing scratched onto flat rock surfaces were also found at these locations. They depict a range of animals such as lizards, fish, turtles ,crocodiles, koeskoezen (a marsupial species), snakes, birds and sea horses.  Apart from the findings in the  Kaimena region, Petro-glyphs were also  found, among others, in the Golf of Berau  (at the ‘beak’ of the Bird Head region) , in the highlands south of the Baliem Valley (at a height of  3850 meters) and in the Jafi Area, near Jayapura along Humboldt Bay (now known as Yos Sudarso). The geological sites in Papua contain the largest collection of petro glyphs in all of Indonesia.

3. Trade with Ceram, Island of Spices


According to historians, prehistory includes the period from 2 million or more years ago to 3000 BC, when

the first written records were created, as far as we know. In other words, history commenced when man was able to record what happened. In the Netherlands prehistoric times ended when the Romans appeared and in New Guinea this occurred when Indonesian traders arrived. The first ‘immigrants’ hit the Bird Head area around 4000 years ago. They came form the island of Ceram renowned for the Radjas that lived here. Radjas were local leaders responsible for maintaining justice and social harmony.  For centuries, the Radjas of Ceram, then know as Nusa Ina (mother island) were known for the spices they traded. Legendary tales explain that the birth place of man is Nunu Saku, on Ceram. Traders set up sosolots (small fortified trade centers), from which they had a monopoly on trade relations. No-one else  but the Radjas in the area were allowed to set up trade. A number of these trading centers were still in use at the beginning of the 20th Century. The sosolots formed part of an extensive trade network right across South-East Asia and Melanesia. 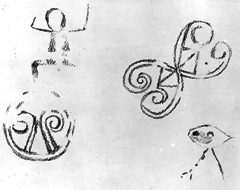 of Speelman Bay (now Tuluk Bitsyaru) near Namatote island. Keyts was chief merchant at the East India Company( VOC). He was the first visitor to this particular area and planted the Dutch flag Arguni Bay, north of Kaimana. He named  this  bay 'Heer(sir) Quaalberghs Bay' after the then governor of Banda.  For political and trading reasons, the VOC kept the discovery a secret. In 1878, two centuries later, these red drawings were rediscovered, along with a great number of other red, white and black rock paintings on small islands along the south coast of MacCleury Golf(currently Teluk Berau . From 1937 onwards, this coastal region was visited many a time to be studied by a German anthropologist , Dr. Josef Röder. In 1937 he wrote the first scientific paper about prehistoric paintings in Papua.


The designs are still clearly visible, despite the fact that these rock drawing are centuries old and that 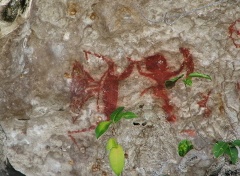 they created from natural materials, such as: vegetable dyes and pigments made of lime or soil, containing iron. The paint was applied in a variety of ways by using fingers and simple brushes.  Sometimes the paint was sprayed on by using the mouth or blown onto the rock face by using hollow reeds.
The number of theories exist about the meaning these painted images might have had for the makers is considerable, as is the number of researchers who have come up with the ideas on the matter. Some assume that the reason for depicting animals is the fear of such animals. To allay this fear the best Papuan artist in the vicinity was asked to create an image of the animal either with charcoal or  coloured pigments. Others proposed that it concerned the depiction of prey was part of magical hunting rituals.
Beside animal images, a variety of signs were also placed on the rock surfaces. These signs have been classified into male and female categories. The zone around the entrance of a cave contains signs  signifying the male, signs signifying the female (but also the male ) were found more towards the centre of cave.
In these caves a number of prehistoric sculptured figures have  also been found. All of these are of a similar age and date back to a specific period in time.


The most significant find of rock drawings is on Mysol, near the village of Fàfanlàp on the east side of the island. Interestingly, tht the ethnographer F.S.A. de Clercq was already aware of this location in 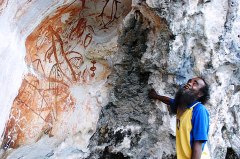 1887. This is clear from the following observation  by De Clercq and Smeltz(1893):”
“Sometimes  skulls were kept in caves for the dead, as is the case at Kafòpop, a town situated on an inland sea, on the east coast of Mysol, where  in such cave, the wall is adorned with images of hands, and therefore in the language of four Rajahs is considered ‘warnaoe’ i.e. sacrate, and must not be approached. On the limestone rocks near the village Fàfanlàp, the drawings are both on the outside and in on the inside of the cave. The cave is partially under water and the drawings could only be photographed from a prauw (Papuan canoe). The drawings outside, high up  on the cliff, were not very clear. There were hand silhouettes, including one of a hand with fingers missing, as well as two designs of concentric circles, with dots, in red/orange and yellow. In the shallow section of the cave, hand silhouettes are visible, and also fish, dolphins, 'stick' figures, images of people in various styles, rows of points, some canoes and abstract signs. Some drawings are hardly visible, because of subsequent calcium deposits. That this environment is still sacred, is obvious from the fact that people when passing the cliff, shoot arrows at the cliff face.”

Along with the urge to decorate, man has always had that urge to express himself. That something like 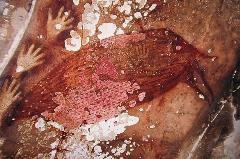 drawing on rock surfaces happened was a matter of course, because this media was present  in abundance. The images in the  caves on the west side of New Guinea probably arose as a result of rites associated with death, hunting, fertility and warding off evil.
These rock drawing may come under threat because of a number of factors such as  erosion, water damage, collapse of the cliffs, graffiti and tourism. Elsewhere in the world  the public interest in rock paintings has led to gradual changes  in the microclimate in the caves where they occur. Humidity and temperature increased, as did the level of carbon dioxide. Fungi also have  affected the walls and ceilings of caves on some sites.  Furthermore, climatic conditions (think of  acid rain) threaten prehistoric art forms. In Indonesian Papua, the situation is not that serious as yet. According to the Archaeological Research Centre in Jayapura, there are enough unexplored sites and many of the well-known sites have not been mapped at all.